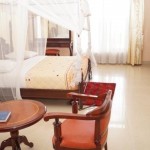 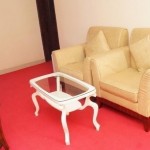 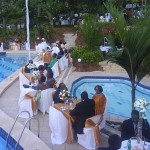 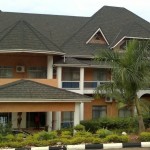 1 Review
1.0
Write a Review
1.0
Balya Justine
J&M Airport Road HotelPlot 245, Bwebajja, Kampala-Entebbe Road+256782122140https://www.yellow.ug/img/ug/h/_1517815841-83-j-m-airport-road-hotel.jpg
1
One of the Worst places I have been.
J&M has to be one of the worst hotels I have been to in Uganda. The manager is so rude, and the staff are insolent, slow and unresponsive. It was so disappointing that our coordinator was woken up by the manager very early in the morning quarreling about the fact that most of the party we had expected for a workshop chose not to sleep over, despite the fact that we were still paying for their rooms and their breakfast. That was our problem, not theirs, and since we did not ask for a refund, I did not see the reason for such rudeness. What was described as a breakfast buffet was just tea and bread, and they got the cheapest mineral water on the market (blue wave) to serve to the people. The staff were still cleaning the room at 9.30 yet the workshop was scheduled to start at 8.30. I have no kind words for this place.
LISTING OWNER
Muhammad Kizza
This is a letter from a person who miss planned and tried to pass the blame to the hotel.

First i encouraged her to get details from the lady who made the booking.
The booking person, who contacted us had used our services before.
She had this time made it clear that she inquired about our current position in cost and we informed her of the obligation of both parties expected.

It was however clear that much as they wanted a booking ,they were not sure of the numbers that would attend.
We had told their representative that, WE take the reservation they made with us serous and they should thus proceed to send us a written confirmation and as well as payments which was the other issue we had agreed.
Now for an NGO of their capacity what we requested was just a bare minimum.

Now also the fact that, they were to present a controversial topic, while hosting a sensitive arm of government made it clear why they were not sure if attendance,and financial commitment.
Its important to note that we sustained a contract with the lady who make their booking for two days with reminders. However she promised to fulfill her part which she did not.
IT CAME TO A TIME ON THE EVE OF THE FUNCTION, WITHOUT ANY COMMUNICATION AND COMMITMENT FINANCIALLY.

Later that evening, the lady calls very late and apologizes for the silence that she was busy. That was the day when their gusts were meant to check in but we had not heard from any.
Now as a Hotel We have experienced many NO SHOW guests and functions and so, we closed our day knowing that, it was another no show.

To our surprise the booking Lady shows up towards mid night when most of us had left. I was called because she needed clearances from our security at the Gate.
Had it not been for that I would be surprised to find her checked in.
Anyway, we could not turn them away. I instructed their entry, but well knowing that things will have to change as we were not committed and prepared for them.

She asked me at that time whether I have received any of her invited guests on phone I told her no.
She seemed very worried,about the possibility of them not turning up. She decided to go ahead and check in alone any way.

So in the morning our biggest challenge was that, she woke up early and started to instruct the few staff to change this and that and bring things, as if COMMUNICATING AND MAKING ARRANGEMENT WITH MANAGEMENT WAS NOT IMPORTANT.

LONG story cut short we set up for the function with a lot of difficulty because it was against the company policy to prepare for guests who have not paid up.
I had even suggested to them to consider counseling or rescheduling the function but they refused.
Then, at the time I First meet the complainant in ALL THIS, I did not know her before except for the other lady who make their booking and who was responsible for all this bad arrangement. It was as if they would black mail us in to taking responsibility and bow to all their demands without settling the financials.

They had managed to cow most of our staff,till we came in and told them what we expected of them from the start.
It took a lot to convince and even boldness to have our cheque for the workshop as they clearly wanted to run away from their obligation to pay for the reservation.

WE HAD MADE IT CLEAR BEFORE THAT WE WILL NOT SERVE THEM WELL BEFORE THEY SETTLE,
BUT OUR COMPLAINANT TURN INTO HER PUNCHING BAG, ASSURING US THAT THE HOTEL
IS FAKE AND THEY HAVE SEEN BETTER.
ALL THIS WAS IN DISREGARD OF THE FACT THAT THEY HAD NOT COMMUNICATED,NOT TURNED UP EARLY AS ORGANIZERS,NOT
MAKING ANY APPEARANCE TO OVERSEE, OR PARTICIPATED IN THE TO BE ARRANGEMENTS.
I AM NOT SURPRISED THAT THE LADY WHO MAKES THEIR BOOKING IS SILENT WHILE THE THIRD PARTY IS RAISING
THESE ISSUES.
This is feed back that we got and we will review it .
However behind the scene ,we had a totally different story.

It is very important to know that eventually we had a round table meting with their booking person ,
She delivered payment though very late and we served them and the one day workshop went on well. We
were only disorganized at the beginning considering that they had failed us.

So please let that lady's blackmail stop.
She wrote this out of emotions without analyzing the facts.
I personally called the booking person at the end of the workshop on a later note and she came to our
hotel,we had a nice chart and i saw her off. So where is miss Balya coming from now.
Why not the lady I was dealing with especially as I charted with her at our outlet.

Thank you.
Call me please in case of any further clarifications. +256782122140
Reply Useful Wrong

0
Ask a Question
Have questions? Get answers from J&M Airport Road Hotel or Yellow.ug users. Visitors haven’t asked any questions yet.

J&M Airport road hotel is a chic contemporary hotel, fantastically located in a quiet retreat with fantastic links and connections to Entebbe International Airport and Kampala capital city. The hotel location and great transport link makes it the perfect pit stop whether you are heading to the Entebbe airport , Kajjansi Airstrip nearby or the opposite way into Central Kampala.

J&M Airport Road Hotel and Conference Center is dedicated to providing the best hotel accommodation and conference venues in Uganda. We offer a wide range of services; Accommodation,venues for; Meetings, Events, Weddings, social programs, holiday retreats, workshops, press briefings and product launches in Kampala and Entebe. Our Event halls are all equipped to the highest standard for any sort of event.

Uganda Hotel Owners Association. Despite its pivotal central location along Kampala- Entebbe road (Airport road), J&M Airport road hotel remains one of the best price hotels in Kampala and Entebbe. True to its title and offers an oasis of serenity amidst the bustle of one of Africa's most vibrant capital cities.

Staying at J&M Airport road hotel makes travelling fun for the whole family! What a wonderful place for a weekend getaway or family vacation! There’s so much to do that you will never want to leave the hotel. The majority of our rooms are either Standard or Superior rooms: interconnecting rooms can be supplied for family groups. Perfect for the business executives and vacationers visiting the city of Kampala and Entebbe or connecting to Kajjansi Airfield.

We offer a wide range of (100+) of rooms and suites, all of which are elegantly presented in fusion of international and Ugandan style, and many of which with tasteful decor combined with modern necessities such as Multi-channel Television, WiFi and cable internet connections for luxurious yet highly functional accommodation in Kampala. J&M Airport road hotel also offers world-class conference facilities, and the exclusive health club and spa.

Accommodation
We offer a wide range of (180+) of rooms and suites, all of which are elegantly presented in fusion of international and Ugandan style, and many of which with tasteful decor combined with modern neces...

Conferences and Events
The J&M Airport road hotel conference center is Kampala's leading social and corporate venue. An interactive facility, which can be event-tailored, it offers: The Conference Center, which enjoys its o...

Similiar Page for Your Business?

Make sure everyone can find your business online. Create your dedicated company page on Yellow.ug - it's simply and easy!
List Your Business
BACK TO TOP